Nootdorp is a village in the municipality of Pijnacker-Nootdorp. It is near The Hague, Delft and Pijnacker. Nootdorp until January 1, 2002 an independent municipality. For financial reasons and to annexation by Den Haag or Delft to be, merged with Nootdorp Pijnacker. The bulk of the Vinex Ypenburg was originally Nut Village territory. This was partly in the year 2002 to the Hague.

The first time we find a mention of Nootdorp in 1281, when discussing the Noitdorper wech (= safe way between the mined peatlands). Presumably Nootdorperweg which is the same as the current Veenweg. In the peat-rich region, was fired on either side of the Noitdorper wech turf, which was especially designed for Die Hage, but also to Delft and the abbey of Loosduinen. In 1303 the first priest is appointed for residents to Noitdorper wech, which then becomes shorter termed Nut Village. The parish was administratively quite some time from the two lordships: Nieuwveen and Hoogeveen. First in 1724, there is the glory Nootdorp, who was from "the Count's bosom was withdrawn." The glory Nootdorp then existed alongside those of Hoogeveen and Nieuwveen. Ecclesiastical they have the three of them formed a single parish. (The Earl of) The Hague from the beginning was also master of Nieuwveen. Most peat was intended for the residents of The Courtyard. Until well into the 18th century Nootdorp has remained a farming village. Mid 18th century it had about 300 inhabitants. One hundred years later that number had doubled. The population of 1870 consists of 707 people, including 350 men and 357 women. What religion is concerned there are 373 Catholics and Protestants equally, including 331 Dutch Reformed.

After World War II, the church will grow. Work has begun on the construction of the Green Singel, designed by architect and urban designer SJ Embden. Then in the 60 Plan West constructed, was built in the seventies, the district Female Country and in the '80s, the district built behind the town hall. In the 90's are all greenhouses on the Veenweg and Kerkweg moved to gardeners Noukoop area. In the late 90's further New Veen district built. In 2002 the construction of shopping Parade was completed. This was erected on the spot where once the Short Course Harness races were held, the Nootdorpse Drafbaan.

The name Nootdorp is composed of the words 'note' and 'village'. Be said about the meaning of the first part 'note' the following can. The Middle Dutch word 'note' is in all the older Germanic languages, as in the Old High German Noz, the Anglo-Saxon NEAT, the Old noordsch naut, Swedish RIP, the Old frieze wet, today's North Frisian utility, Danish nöd , the English navy. The even older origin of the word lies in the Gothic verb niutan, our ge-stapling, which includes utility belongs. The original meaning of the word 'note' was: what produces the country to live. The contemporary terms 'emergency', 'necessity', 'necessary', 'useful' still refer to here. In the Middle Ages had the word "note" a twofold meaning: it could indicate the products of the country, so grain, grass but also wood and peat. The word was also used in some areas to refer to 'livestock'. To distinguish between the ordinary income and the cattle one sees in medieval writings the word "nut" also in connection with 'quic' (live; directly related to today's words grow and grow and spry, in the sense of liveliness) . So the word quekenoot emerged as a designation for livestock. It can be assumed that the term 'note' in the name refers to Nootdorp the first sense: land (construction) product. The current Long weg was formerly Notweg or Nootweg. In a few other places in the Netherlands, we get the term "note" yet against in street names, such as the Notweg in Bergen and Nootweg in Loosdrecht. About the meaning of the term 'Nootweg' can be mentioned the following. In a document of 1401 is to a certain Coen van Oosterwijk granted the freedom to diking the land outside the Zeeburg between Amsterdam and Ypesloot, while was at least permitted, 'in his country lanes to legghen to aen the Zeeburch to be Noote Uyt income to enter the country. "From this sense it can be seen that the word" nut "around 1400 even without the prefix 'queke' has come to mean livestock. The most common meaning of the term in Netherlands Nootweg or Notweg is the road on which they moved cattle.

The second part 'village' has since 1200 in the Netherlands do not undergo significant change: it is a collection of houses. The word itself is much older and come in similar sounds also reflected in many Germanic languages. Linguists also point in this regard on the link with the word 'mound', an artificial increase in sod. Nootdorp is that connection very special. The oldest known written record of Nootdorp dates from 1281 (Noitdorp). Because there are about 1700 to no formal notation exist, the name Nootdorp is in older pieces written down on the way in which the name of the writer understood. This has led to many different spellings: Noitdorp, Nut Dorpe, Noittorpe, Notdorp etc.

In 1885 started the construction of the mill 'The Windlust' at the intersection of the Oudeweg, Geerweg and what is called the Strijf that time, the quay between the current Cross Quay area and the Dobbeplas area. The old hollow post mill that has been around since 1700 in that place, is broken down before. The construction of the new mill illustrates the growth of livestock and agriculture in the reclaimed areas. The Windlust itself at the time of construction is not new: it comes from Delft where he had done since 1780/81 as a bovine, snuff and fulling mill. In February 1885 he dismantled it and transported in parts to Nootdorp to service after rebuilding to do as a corn mill. The first stone of the foundation of the mill followed by the 5-year Leendert Blonk, son of miller Blonk, the owner of the mill.

On the main street, the Protestant village church with a tower in 1547. In 1894, the church except the tower demolished completely. The new building went well:. 6 months after the 1st stone was laid on October 1, 1894, by the Rev. Van 't Hooft, the church was completely renovated back into use.On the Veenweg are located quite some historic homes, as well as the Bartholomew Church. This Roman Catholic church dates from 1871 and was designed by Evert Margry. To see all of the A12 motorway, this striking point. The church is a listed building and has recently (2009-2013) radically renovated.Short Course steeplechase Nootdorp. Every year during the fair week Nootdorpse the battleground for the Silver Whip. The battle for the whip goes back to 1792.

Nootdorp is also the end of the Hague tram line 15. In addition, the village is accessible via bus 30 from The Hague / Rijswijk, bus 60 from Delft and local bus 484 from Pijnacker. Also, Nootdorp by bus N2 connected to the HTM NachNet, which runs a nightly bus service between Hague and Nootdorp (Thursday, Friday and Saturday night).

In history has Nootdorp two stations and had a stop: Veenweg Station, Station Stopping Nootdorp Nootdorp East and North.Known Nootdorpers 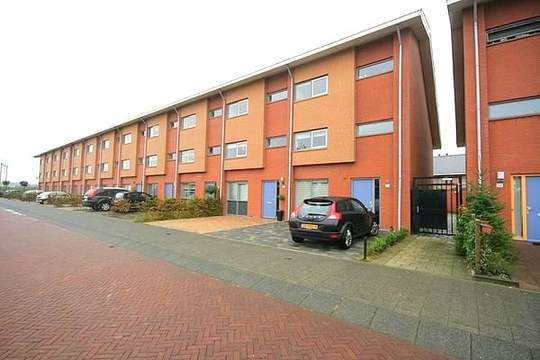